Biewer Standard
​
The United Kennel Club breed standard for the Biewer Terrier  was written by the UKC is owned and copyright licensed to the UKC. You can find that standard here; https;www.ukcdogs.com/biewer-terrier.​
In 1984 the first Biewer litter was whelped in Germany to breeders Werner and Gertrude Biewer.
They believed that they had bred together two traditional Yorkies.  In reality, the were breeding decades of recessive genes along with a Piebald gene that could be traced back to the "earth dogs
To understand the complete history of this breed on must go back to the beginning of the earth dog. Terriers were developed from the earth dog long before breeding records were developed.  British farmers informally bred the earth dog to hunt and kill rats, mice and other small animals which could damage their crops.
Documentation on file from the 1800's show that the Skye Terrier and the now extinct Paisley and Clydesdale Terrier all contributed to the color, markings, hair quality, temperament and size of the Biewer.
Led by a founder of American Biewer Club, the breed's DNA was analyzed by the U C Davis Veterinary Genetics Laboratory to assess its genetic diversity.  The results showed that the breed was founded mostly on a small number of dogs and while a few dogs are genetic outliners, most of the breed lacks genetic diversity as a result.
This analysis, along with the publications and written eyewitness accounts from the early breeders and kennel employees strongly support the likelihood that the phenotypical trails, most notably the Biewers distinctive white markings were already contained in the DNA of this breed.   When the original breeders for whom the breed is named, Mr. And Mrs. Biewer, were surprised by puppies with the elegant markings, they chose to keep these puppies rather than cull them as was the common practice of Yorkie breeders at the time.
In the decades since, the Biewer breed has been found to have other recessive color genes, such as the brown and gold, as well as different texture of the coat, which is addressed in our standard.  The pipe bald gene that causes white markings allows dogs to retain pigment in the most important area of its body, around its internal organs, (body and tail base patches) and is brain (ears and face patches).  As a puppy develops in utero, pigmentation spread from the center of the body and head outward.   The piebald gene effectively slows that process at varying rates in different dogs.  Some breeds have legs that are all white while other breeds may have only white toes.
Characteristics:
The  Biewer is intelligent, loyal and friendly.  Because of their fun loving, child-like attitude, and willingness to please, they are very competitive in agility.  Their love for retrieving balls makes them a great candidate for relay.   They are a great companion for any age, and because  of their playful attitude, they are fabulous with children .
General Appearance:
With a high head carriage and alert confident  manner, the Biewer displays an "important air". The dog's outline conveys the impression of a well proportional, powerful, compact, and neat body. 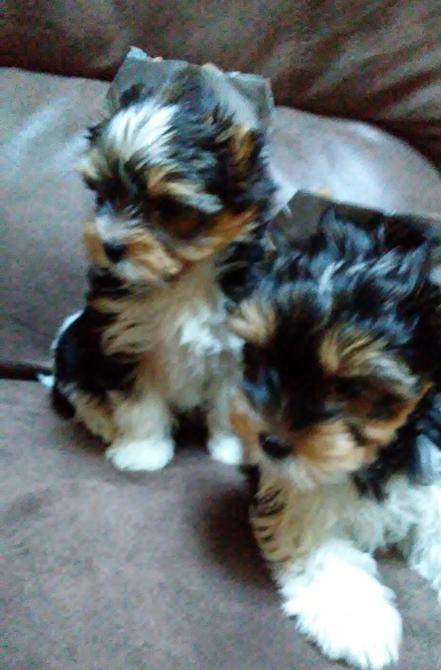 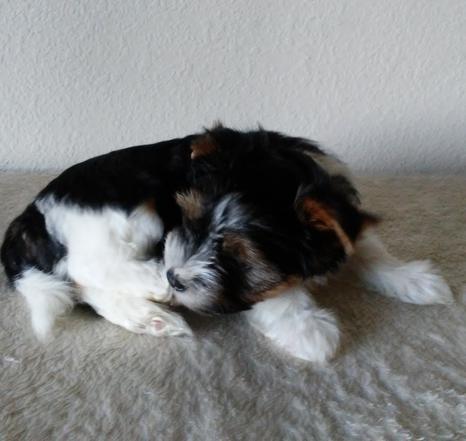